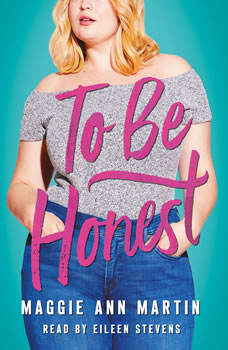 The author of The Big F is back with another snappy, utterly relatable contemporary audiobook about loving yourself and forging your own path.Savannah is dreading being home alone with her overbearing mother after her big sister—and best friend—goes off to college. But if she can just get through senior year, she'll be able to escape to college, too. What she doesn't count on is that her mother's obsession with weight has only grown deeper since her appearance on an extreme weight-loss show, and now Savvy's mom is pressuring her even harder to be constantly mindful of what she eats. Between her mom's diet-helicoptering, missing her sister, and worrying about her collegiate future, Savvy has enough to worry about. And then she meets George, the cute new kid at school who has insecurities of his own. As Savvy and George grow closer, they help each other discover how to live in the moment and enjoy the here and now before it disappears.To Be Honest is another sharp, witty audiobook from Maggie Ann Martin, about a spunky heroine who is dealing with very real issues—body image, parental pressure, loneliness, first love, and finding your way—with heart and humor.Praise for The Big F:"Martin’s first book is nothing short of amazing! You’ll laugh, cry and scream with every page as you follow Danielle and her realistic yet zany post–high-school antics. . . . The Big F deserves an A-plus for being the quirkiest, most fun-loving read of [the year] so far!" — RT Book Reviews"A debut novel sure to resonate with high schoolers who eagerly anticipate graduation and the start of college." — School Library Journal

Two boys, separated by the canyons of time and two vastly different cultures, face the challenges by which they will become men.Coyote Runs, an Apache boy, takes part in his first raid. But he is to be a man for only a short time.More than a hundred...

A modern-day classic and New York Times bestseller that celebrates the power of individuality and personal expression from beloved Newbery Medalist Jerry Spinelli.Stargirl. From the day she arrives at quiet Mica High in a burst of color and sound, ...

When Iggy Corso gets kicked out of high school, there’s no one for him to tell. His mother has gone off, his father is stoned on the couch, and because the phone’s been disconnected, even the social worker can’t get through. So he ...

Seven months ago, on a rainy March night, sixteen year- old Willow’s parents died in a horrible car accident. Willow was driving. Now her older brother barely speaks to her, her new classmates know her as the killer orphan girl, and Willow is ...

A Step From Heaven
by An Na

From master storyteller An Na comes the Printz Award–winning novel about a Korean girl who tells her firsthand account of trying to find her place and identity in America from the day she leaves Korea as a child to her rocky journey through th...

With a dazzling and thoughtful voice, this critically acclaimed novel deals directly with the challenges and dangers of immigration, exploring the ties that bind us together in an age when issues threaten to divide us. One night Sophie and her pare...

What's new in LaVaughn's life is Jody--a boy she knew as a child who's come back to the housing project where she lives. Jody is like a miracle: He smells like chlorine, he calls her "little buddy," he goes with her to the dance. It's ju...

The Iron Thorn The Iron Codex Book One
by Caitlin Kittredge

In the city of Lovecraft, the Proctors rule and a great Engine turns below the streets, grinding any resistance to their order to dust. The necrovirus is blamed for Lovecraft's epidemic of madness, for the strange and eldritch creatures that roam th...