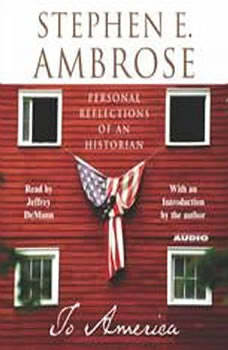 To America: Personal Reflections of an Historian

Reflecting on his career, Stephen E. Ambrose -- one of the country's most influential historians -- confronts America's failures and struggles as he explores both its moral and pragmatic triumphs. To America celebrates the men and women who invented the United States and made it exceptional. Taking a few swings at today's political correctness, Ambrose grapples with the country's historic sins of racism, its neglect and ill treatment of Native Americans, and its tragic errors. He reflects on some of the early founders -- great men such as Washington and Jefferson -- who, while progressive thinkers, lived a contradiction as slaveholders. He contemplates the genius of Andrew Jackson's defeat of a vastly superior British force with a ragtag army in the War of 1812. He describes the grueling journey that Lewis and Clark made to open up the country, and the building of the railroad that produced great riches for a few barons. Ambrose explains the misunderstood presidency of Ulysses S. Grant, records the country's assumption of world power under the leadership of Theodore Roosevelt, and extols the heroic victory of World War II. He explores women's rights and civil rights, immigration, museum and nation-building. Most importantly, Ambrose tells us about writing history, and about what an historian's job is all about. As he says, "The last five letters of the word 'history' tell us that it is an account of the past that is about people and what they did, which is what makes it the most fascinating of subjects." As he reflects upon American history, Ambrose shares his own personal history. To America is an instant classic for those interested in history, patriotism, and the love of writing.