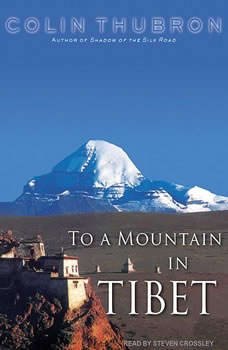 To a Mountain in Tibet

This is the account of a journey to the holiest mountain on earth, the solitary peak of Kailas in Tibet, sacred to one-fifth of humankind. To both Buddhists and Hindus it is the mystic heart of the world and an ancient site of pilgrimage. It has never been climbed. Even today, under Chinese domination, the people of four religions circle the mountain in devotion to different gods. Colin Thubron reached it by foot along the Karnali River, the highest source of the Ganges. His journey is an entry into the culture of today's Tibet, and a pilgrimage in the wake his mother's death and the loss of his family. He undertakes it in order to mark the event, to leave a sign of their passage. He also explores his own need for solitude, which has shaped his career as a writer—one who travels to places beyond his own history and culture, writing about them and about the journey. To a Mountain in Tibet is at once a powerful travelogue, a fascinated encounter with alien faith, and an intimate personal voyage. It is a haunting and beautiful book, a rare mix of discovery and loss. In its evocation of landscape and variety of exotic peoples, of mythic and spiritual traditions foreign to our own, it is a spectacular achievement from our greatest living travel writer, an artist of formidable literary gifts, uncanny intuition, and wondrous insight.