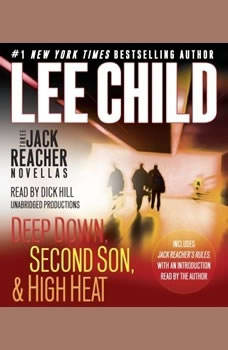 Deep Down:
In thriller master Lee Child’s short story Deep Down, Jack Reacher must track down a spy in soldier’s clothing—by matching wits with four formidable females. Three are clean—but the fourth may prove fatal.

Summoned by Military Intelligence to Washington, D.C., Reacher is sent undercover. The assignment that awaits him: The army is meeting with its Capitol Hill paymasters for classified talks on a new, state-of-the-art sniper rifle for U.S. forces. But vital details about the weapon are leaking—straight from the Capitol and probably into the hands of unidentified foreign arms dealers. The prospect of any and every terrorist, mercenary, or dictator’s militia getting their hands on the latest superior firepower is unthinkable. That’s where Reacher comes in. His task: infiltrate the top-secret proceedings and smoke out the mole. His target: a quartet of high-powered Army political liaison officers—all of them fast-track women on their way to the top.

According to his bosses, it’s a zero-danger mission. No need to draw a gun . . . just chat over drinks. But Reacher knows that things are rarely what they seem. And he’s learned the hard way never to underestimate an opponent. Or four. Lessons that will come in handy when he starts digging for the truth—and gets his hands a lot dirtier than he expected.

Second Son:
A young Jack Reacher knows how to finish a fight so it stays finished. He knows how to get the job done so it stays done. And, in one of his earliest challenges, he knows that his analytical brain is just as important as his impressive brawn.

Okinawa, 1974. Even at thirteen, Jack Reacher knows how to outwit and overpower anyone who stands in his way. And as the new kid in town, that’s pretty much everyone. His family has come to the Pacific with his father, who’s preparing for a top-secret Marine Corps operation. After receiving a rude welcome from the local military brats, Reacher and his older brother, Joe, intend to teach them a lesson they won’t forget. But it’s soon clear that there’s more at stake than pride. When his family’s future appears to come crumbling down, it’s the youngest Reacher who rises to the occasion with all the decisive cunning and bravura that will one day be his deadly trademark.

High Heat:
In the midst of a savage heat wave and an infamous murder spree, a blackout awakens the dark side of the city that never sleeps—and a young Jack Reacher takes action as only he can.

July 1977. Jack Reacher is almost seventeen, and he stops in New York City on the way to visit his brother at West Point. The summer heat is suffocating, the city is bankrupt, and the mad gunman known as Son of Sam is still on the loose. Reacher meets a woman with a problem, and agrees to help her . . . but then the power grid fails and the lights go out, plunging the lawless city into chaos. What does a visiting teenager do in the dark? If that visiting teenager is Jack Reacher, the answer is plenty.

Jack Reacher's Rules:
Jack Reacher’s Rules is the ultimate fan’s guide to the World of Reacher! Featuring selections from all seventeen electrifying Jack Reacher novels and an introduction from Lee Child himself, this one-of-a-kind audiobook compiles timeless advice from maverick former army cop Jack Reacher, the hero of Lee Child’s blockbuster thrillers and now the star of a major motion picture.

My name is Jack Reacher.
No middle name, no address.
I’ve got a rule: People mess with me at their own risk.

You don’t have to break the rules if you make the rules. Case in point: Jack Reacher, the two-fisted, quick-witted, “current poster-boy of American crime fiction” (Los Angeles Times). The brainchild of #1 New York Times bestselling author Lee Child, Reacher is a freelance troubleshooter with a mysterious past—and a serious passion for justice.  Now the hard-won knowledge and hard-hitting strategies of fiction’s toughest tough guy are within every thriller listener's reach—in a rapid-fire rundown of the trade secrets, tried-and-true tricks, and time-honored tactics that separate the man in the street from the man to beat.

Rule 1. When in doubt, drink coffee.
Rule 2. Never volunteer for anything.
Rule 3. Don’t break the furniture.
Rule 4. Only one woman at a time.
Rule 5. Show them what they’re messing with.

Please note: Jack Reacher’s Rules is a compilation of advice, wisdom, and facts from the Jack Reacher series of novels by #1 New York Times bestselling author Lee Child. It features an introduction by Lee Child, but is not a Jack Reacher novel.