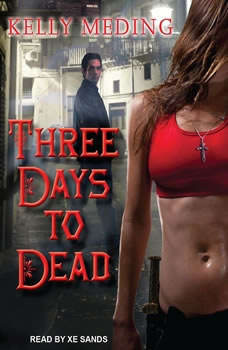 When Evangeline Stone wakes up naked and bruised on a cold slab at the morgue—in a stranger's body, with no memory of who she is and how she got there—her troubles are only just beginning. Before that night, she and the other two members of her Triad were star bounty hunters—mercilessly cleansing the city of the murderous creatures living in the shadows, from vampires to shape-shifters to trolls. Then something terrible happened that not only cost all three of them their lives, but also convinced the city's other Hunters that Evy was a traitor...and she can't even remember what it was. Now she's a fugitive, piecing together her memory, trying to deal some serious justice—and discovering that she has only three days to solve her own murder before the reincarnation spell wears off. Because in three days, Evy will die again—but this time, there's no second chance.

I hate to base the quality of the story on the narration, but the narrator was just that bad. She had a good voice, but spent the entire time sounding like she was talking about crop reports. Basically I couldnt tell if the story was any good and wish I had read it instead of listened..I couldnt get engaged emotionally even though there was romance and a lot of action. I guess what bothered me also was how tidy all the loose ends were tied at the end. The dead lover that didnt stay dead.Oh and the way Evie found a second chance at life halfway through the book. I never found myself rooting for her to continue living and wasnt sad when her lover died. Eh dont waste your time.

As Lie the Dead
Dreg City #2

Another Kind of Dead
Dreg City #3