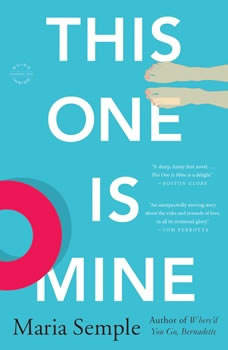 This One Is Mine

Violet Parry is living the quintessential life of luxury in the Hollywood Hills with David, her rock-and-roll manager husband, and her darling toddler, Dot. She has the perfect life--except that she's deeply unhappy. David expects the world of Violet but gives little of himself in return. When she meets Teddy, a roguish small-time bass player, Violet comes alive, and soon she's risking everything for the chance to find herself again. Also in the picture are David's hilariously high-strung sister, Sally, on the prowl for a successful husband, and Jeremy, the ESPN sportscaster savant who falls into her trap. For all their recklessness, Violet and Sally will discover that David and Jeremy have a few surprises of their own. THIS ONE IS MINE is a compassionate and wickedly funny satire about our need for more--and the often disastrous choices we make in the name of happiness.

In the wild, when a wolf knows its time is over, when it knows it is of no more use to its pack, it may sometimes choose to slip away. Dying apart from its family, it stays proud and true to its nature. Humans aren’t so lucky. Luke Warren has ...