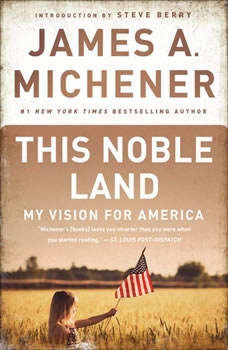 This Noble Land: My Vision For America

In such modern classics as Chesapeake, Centennial, Hawaii, Alaska, and Texas, James A. Michener proved time and again that his understanding of and love for his country was unparalleled. This Noble Land is Michener’s most personal statement about America, an examination of the issues that threaten to fragment and undermine the nation—racial conflict, the widening gulf between rich and poor, the decline of education, the inadequacies of our health care system—as well as a thought-provoking prescription for sustaining our “outstanding success.” Infused with the wisdom and passion of a lifetime, This Noble Land stands as a wake-up call for a troubled era.

Praise for This Noble Land

“A book-length essay on the often worrying, often inspiring course of America in the nine decades of Michener’s life.”—The Washington Post

“Michener’s are the beach books that, unlike most other beach books, leave you smarter than you were when you started reading. Each delivers the product of all that research, doled out to the reader at just the right rate. You know right away who the bad guys are—the petty ones, the stingy ones. The heroes are generous and energetic and smart and, above all, unprejudiced. The real-life villains in This Noble Land are the people Michener perceives as ‘petty, mean and vengeful.’”—St. Louis Post-Dispatch

“Stirring . . . an admirable effort to define what has made our country great and how to preserve what is best about it.”—Kirkus Reviews

NEW YORK TIMES BESTSELLER“Epic and debate-shifting.” —David Brooks, New York Times "More than any book published so far in this century, it deserves to be called a conservative classic." —Yuval Levin, National Revie...

In 1831, Alexis de Tocqueville, a young French aristocrat and civil servant, made a nine-month journey through eastern America. The result was Democracy in America, a monumental study of the strengths and weaknesses of the nation's evolving politics...

A bold rethinking of the most powerful political idea in the world—democracy—and the story of how radical democracy can yet transform America   Democracy has been the American religion since before the Revolution—from New Engl...

NEW YORK TIMES BESTSELLERFrom the former secretary of state and bestselling author -- a sweeping look at the global struggle for democracy and why America must continue to support the cause of human freedom."This heartfelt and at times very moving ...

The elites still can't believe Donald Trump won or that Britain voted for Brexit. But what’s next for the populist revolution and for the people who believe in it?   Fox News host and former government insider Steve Hilton shows how popu...

In his major bestseller, Race Matters, philosopher Cornel West burst onto the national scene with his searing analysis of the scars of racism in American democracy. Race Matters has become a contemporary classic, still in print after ten years, havi...

How will democracy end? And what will replace it? A preeminent political scientist examines the past, present, and future of an endangered political philosophySince the end of World War II, democracy's sweep across the globe seemed inexorable. Yet ...

NOW A NEW YORK TIMES BESTSELLER! A smart and revealing political memoir from a rising star of the Democratic Party."In life and in politics, the most important work is often that which happens outside the wire."Going "outside the wire" -- military ...