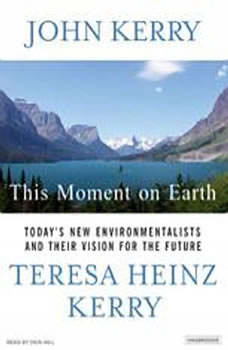 This Moment on Earth: Today's New Environmentalists and Their Vision for the Future

The environment, and the movement that grew up to protect it, is under attack—concerted and purposeful. Yet the need for solutions to pressing environmental problems grows more urgent each day. Teresa Heinz Kerry and Senator John Kerry traveled across the country in a national campaign to see firsthand how these issues unite people across party and ideological lines. From the San Juan Basin to the Gulf of Mexico to the South Bronx, from mothers on Cape Cod to Colorado ranchers, they found a vibrant coalition of people and communities deploying ingenuity, technology, and sheer will power to save the world they know and love. Now, in this passionate and personal book, Senator John Kerry and Teresa Heinz Kerry shine the spotlight on an inspiring cross-section of these new environmental pioneers. This Moment on Earth combines intensive research with keenly observed personal experiences to present a portrait of Americans devoted to the natural diversity and spectacular uniqueness of our country.

In this astonishing book from the author of the best selling memoir The Good Good Pig, Sy Montgomery explores the emotional and physical world of the octopus—a surprisingly complex, intelligent, and spirited creature—and the remarkable c...

As a botanist and professor of plant ecology, Robin Wall Kimmerer has spent a career learning how to ask questions of nature using the tools of science. As a Potawatomi woman, she learned from elders, family, and history that the Potawatomi, as well...

Many people dream of escaping modern life, but most will never act on it. This is the remarkable true story of a man who lived alone in the woods of Maine for 27 years, making this dream a reality—not out of anger at the wo...

Matsutake is the most valuable mushroom in the world—and a weed that grows in human-disturbed forests across the northern hemisphere. Through its ability to nurture trees, matsutake helps forests to grow in daunting places. It is also an edibl...

The Perfect Horse
by Elizabeth Letts

NEW YORK TIMES BESTSELLER • From the author of The Eighty-Dollar Champion, the remarkable story of the heroic rescue of priceless horses in the closing days of World War II In the chaotic last days of the war, a small troop of battle-weary Amer...

The Other End of the Leash: Why We Do What We Do Around Dogs
by Patricia B. McConnell

The Other End of the Leash shares a revolutionary, new perspective on our relationship with dogs, focusing on our behavior in comparison with that of dogs. An applied animal behaviorist and dog trainer with more than twenty years experience, Dr. Pat...

Man’s struggle against the sea is a theme that has created some of the world’s most exciting stories. Now, in the tradition of Moby Dick comes a New York Times best-seller destined to become a modern classic. Written by journalist Sebast...