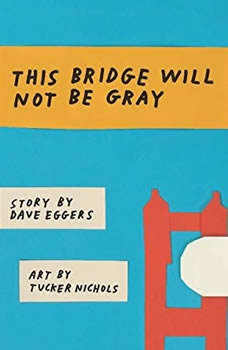 This Bridge Will Not Be Gray, Revised

One of Publishers Weekly's Best Picture Books of 2015. The Golden Gate Bridge is the most famous bridge in the world. It is also, not entirely coincidentally, the world's first bright-orange bridge. But it wasn't supposed to be that way. In this book, fellow bridge-lovers Dave Eggers and Tucker Nichols tell the story of how it happened-how a bridge that some people wanted to be red and white, and some people wanted to be yellow and black, and most people wanted simply to be gray, instead became, thanks to the vision and stick-to-itiveness of a few peculiar architects, one of the most memorable man-made objects ever created. Told with irresistible prose, This Bridge Will Not Be Gray is a joyful history lesson in picture-book form-a gorgeously crafted story that teaches us how beauty and inspiration tend to come from the most unexpected places. Sometimes you have to fight for what you believe in, even if it's just a color.

I Survived #08: I Survived the Japanese Tsunami, 2011
by Lauren Tarshis

During the heart-stopping events of the 2011 earthquake and tsunami in Japan, one boy struggles to make it out alive. The I Survived series continues with a terrifying recent international disaster. Eleven-year-old Japanese-American Owen has been ...

Welcome to 1968 — a revolution in a book. Essays, memoirs, and more by fourteen award-winning authors offer unique perspectives on one of the world’s most tumultuous years.Nineteen sixty-eight was a pivotal year that grew more intense wi...

War in the Middle East
by Wilborn Hampton

New York Times editor and critic Wilborn Hampton is the acclaimed author of gripping narratives like Kennedy Assassination, Meltdown, and September 11, 2001. In War in the Middle East, the veteran journalist offers a fascinating account of his early...

Lets Go to the Beach
by Elizabeth Van Steenwyk

Did you know that women once wore corsets under their bathing suits? Or that semi-drowningthe strip and plunge practicewas thought to be good for ones health? Or that Pudgy Stockton, the body-building queen of Muscle Beach, California, opened the co...

The Glory of Ancient Greece
by Hugh Griffith

The glory of Ancient Greece is all around us, even in the 21st century, because Greece was the cradle of Western civilisation. We know about the gods and their characters – Zeus, Athene, Apollo, Ares, Aphrodite – and their hero...

Her Right Foot
by Dave Eggers

If you had to name a statue, any statue, odds are good you'd mention the Statue of Liberty. Have you seen her? She's in New York. She's holding a torch. And she's in mid-stride, moving forward. But why? In this fascinating and fun take on nonfiction...

With a list of characters from Achilles to Zeus—and all the gods and mortals in between—The Ancient Greek World is one of the most comprehensive history textbooks on one of the most momentous civilizations in history. The Greeks are co...

From award-winning childrens author Jean Fritz comes the incredible true account of the Long March, a six-thousand-mile journey across China In 1986, Jean Fritz went to China and talked to survivors of the Long March. It is from their recollections...

From the city of Pompeii-frozen in time by volcanic ash and lava-to the Coliseum's famed gladiators-treated like rock stars-ancient Rome had it all: Gods and Goddesses, infamous emperors, crippling warfare, and beautiful art. Spartacus, the famous g...