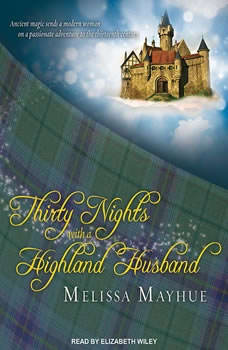 Thirty Nights With a Highland Husband

Series: Daughters of the Glen #1

SCOTLAND, 1272. Connor MacKiernan, a descendant of the Fae Prince, is a warrior who lives only for honor and duty. Though he's vowed never to marry, that's exactly what he must do to save his sister. Enter a little Faerie magic, and the search for a bride is on. DENVER, 2007. Caitlyn Coryell is having a really bad day—she just discovered her fiancé with another woman! Imagine her surprise when she puts on some sexy lingerie and an antique pendant and Connor appears in her bedroom, begging for her help. He offers a simple yet outrageous adventure: travel to his time, marry him, and return home. But nothing's simple when Cate is trapped in the thirteenth century. The wedding's delayed, someone's trying to kill her, and in the middle of all this, she realizes she's falling in love with a man who can only be her husband for thirty nights.