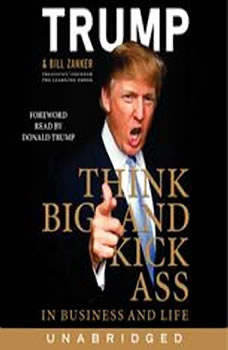 Think BIG and Kick Ass in Business and LIfe

Donald J. Trump is an icon: the very definition of the American success story. President-elect, reality-television star, and developer of some of the planet's most prestigious real estate, he's also become one of the world's wealthiest men.Trump is a living example of how thinking BIG and knowing when to back up your opinions aggressively—regardless of what your critics or opponents might say—can help you maximize your personal and professional achievements. In his first political campaign, Trump defeated his opponents by rallying voters nationwide to "Make America Great Again." For the first time ever, you too can learn Trump’s secrets to thinking BIG and kicking ass! Learn:Momentum: the Big Mo. How to get it and how to get it back.Revenge: how and when to get it (and why it's so sweet)."I love you, now sign this!" Why contracts in business and personal life are so important.Real-life stories from people who've applied the think BIG formula in their own lives.These strategies are proven and attested to by those who've learned to think BIG from Donald Trump and found success in their own lives even when the world seems to be against them. Co-authored with Bill Zanker, an entrepreneur who learned these tactics firsthand from Trump, Think BIG and Kick Ass shows you how to bring a winning attitude to everything you do.

The Go-Giver
by Bob Burg

"Most people just laugh when they hear that the secret to success is giving. . . . Then again, most people are nowhere near as successful as they wish they were." The Go-Giver tells the story of an ambitious young man named Joe who yearns for succ...

The Greatest Salesman in the World
by Og Mandino

What you are today is not important . . . for in this runaway bestseller you will learn how to change your life by applying the secrets you are about to discover in the ancient scrolls. “I will persist until I succeed. I was not delivered...

Secrets of the Millionaire Mind
by T. Harv Eker

In his groundbreaking Secrets of the Millionaire Mind, T. Harv Eker states: "Give me five minutes, and I can predict your financial future for the rest of your life!" Eker does this by identifying your "money and success blueprint." This blueprint ...

The #1 New York Times bestseller that examines how people can champion new ideas—and how leaders can fight groupthink, from the author of Give and Take and co-author of Option B“Reading Originals made me feel like I was seated acros...

The Compound Effect
by Darren Hardy

No gimmicks. No Hyperbole. No Magic Bullet. The Compound Effect is based on the principle that decisions shape your destiny. Little, everyday decisions will either take you to the life you desire or to disaster by default. Darren Hardy, publisher of...

Brian Tracy, the world's leading authority on success and personal achievement, gives you his proven principles and step-by-step tips for raising your self-esteem and improving your life. This audiobook is based on his seminar program that has drama...

Think and Grow Rich is the number one motivational and inspirational classic for those who want to attain financial freedom and independence by learning from numerous important historical business leaders. While the book's title and much of the ...

In the New York Times bestseller that the Washington Post called "Lean In for misfits," Sophia Amoruso shares how she went from dumpster diving to founding one of the fastest-growing retailers in the world. Sophia Amoruso spent her teens hitchhiking...

Secrets of the Millionaire Mind
by T. Harv Eker

Secrets of the Millionaire Mind reveals the missing link between wanting success and achieving it!Have you ever wondered why some people seem to get rich easily, while others are destined for a life of financial struggle? Is the difference found in...