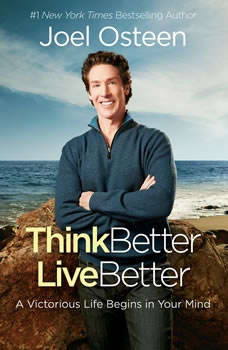 Bestselling author Joel Osteen shares how reprogramming your thoughts to remove negativity will lead to a more blessed, fulfilled life. Your mind has incredible power over your success or failure. THINK BETTER, LIVE BETTER offers a simple yet life-changing strategy for erasing the thoughts that keep you down and reprogramming your mind with positive thinking to reach a new level of victory. As a child of the Most High God, you are equipped to handle anything that comes your way. To claim your destiny, start thinking about yourself the way God does and delete the thoughts that tear down your confidence. When you train yourself to tune out the negativity and tune into your calling, you'll begin to live the wonderful plans God has made for you.

Can two words give you the power to change your life? Yes they can! In the pages of his new book, bestselling author Joel Osteen shares a profound principle based on a simple truth. Whatever follows the words "I am" will always come looking for you...

Joel Osteen, #1 bestselling author and pastor of Lakewood Church, invites you to set aside the shortcomings of the past and step into a new level of victory and favor.Many of us have let our minds become conditioned to thinking we've reached our li...

#1 New York Times best-seller with more than 11 million copies sold and Amazon’s #17 best-selling book of all time. Heaven Is for Real was the best-selling non-fiction book of 2011 as reported by Nielsen’s Bookscan, and it was made in to...

The same God who leads us to green pastures guides us through the valleys. #1 New York Times bestselling author Joel Osteen shares how God uses the darkness in life for good.All of us will go through dark times that we don't understand: a difficult...

Internationally renowned Bible teacher Joyce Meyer draws on her own history of abuse to show women how Christ's redeeming love heals emotional wounds and brings joy to life.Can a woman who has been deeply hurt by life's circumstances be healed, ...

She lost her arm in a shark attack and nearly died, but she never lost her faith. Now a major motion picture,&#160;Soul Surfer&#160;is the moving story of Bethany Hamilton&#8217;s triumphant return to competitive surfing and has continue...

In her new book, New York Times bestselling author Joyce Meyer explores a life lived in complete and total dependence on God. Drawing on her own experiences and inspiration from the Word of God, Joyce makes the case that in every area of your life-...

The #1 bestselling 365-day devotional Jesus Calling® is written as if Jesus Himself is speaking directly to you—words of encouragement, comfort, and reassurance of His unending love. These writings are based on Jesus’ own words of ho...

<p>OVER 500,000 COPIES SOLD! </p><p>In these pages, New York Times bestselling author Shauna Niequist invites you to consider the landscape of your own life, and what it might look like to leave behind the pressure to be perfect a...