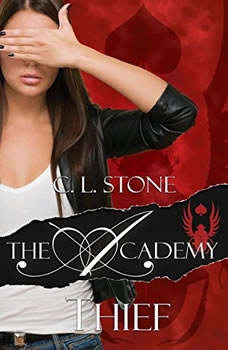 Series: The Academy: The Scarab Beetle #1

From USA TODAY Bestselling Author, C. L. Stone, read Thief, the first book in The Academy Scarab Beetle Series.Kayli Winchester is a dirt-poor girl living out of a hotel, forced to be the parent for a drunken father and teenage brother who she's desperate to keep in school. The only way she scrapes by is to utilize her one skill: pickpocketing. But even though she's a thief she has a moral code: no kids or old ladies, only targets who can defend themselves. Not that they see her coming... Thinking she's been working under the radar, Kayli has no idea The Academy has been watching and taking notice. Now a team that needs her skill has offered her a way out of her predicament and it's her last chance: work with them, or face jail time. Kayli resists at first, but slowly the boys reveal they can be trusted. With Marc, the straight man, Raven, the bad-boy Russian, Corey and Brandon the twins as different as night and day, and Axel their stoic leader, there's a lot Kayli can learn from these Academy guys about living on the edge of the law. If only she can stay on the good side instead of the bad. Especially when the job they offer her is more than any of them bargained for. After it's done, the hunters have become the hunted and their target is now after Kayli. The Academy boys do their best to keep her hidden, but a thief like Kayli will never sit still for long. Meet an all-new Academy team in Thief, the beginning of the Scarab Beetle series. Warning: This is a new adult series. Readers of the other Academy series may need some caution as this series will contain mature sexual and violent situations and themes.

The Academy: The Scarab Beetle Bundle

Get 5% off your total order by adding 3 or more audiobooks from The Academy: The Scarab Beetle

Thief
The Academy: The Scarab Beetle #1

Liar
The Academy: The Scarab Beetle #2

Fake
The Academy: The Scarab Beetle #3