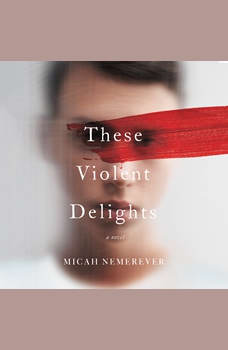 These Violent Delights: A Novel

An O Magazine.com LGBTQ Book That Is Changing the Literary Landscape in 2020 • An Electric Lit Most Anticipated Debut of the Second Half of 2020 • A The Millions Most Anticipated Book of the Year • A Paperback Paris Best New LGBTQ+ Books To Read This Year Selection

The Secret History meets Lie with Me in Micah Nemerever's compulsively readable debut novel—a feverishly taut Hitchcockian story about two college students, each with his own troubled past, whose escalating obsession with one another leads to an act of unspeakable violence.

When Paul and Julian meet as university freshmen in early 1970s Pittsburgh, they are immediately drawn to one another. A talented artist, Paul is sensitive and agonizingly insecure, incomprehensible to his working-class family, and desolate with grief over his father’s recent death.

Paul sees the wealthy, effortlessly charming Julian as his sole intellectual equal—an ally against the conventional world he finds so suffocating. He idolizes his friend for his magnetic confidence. But as charismatic as he can choose to be, Julian is also volatile and capriciously cruel. And admiration isn’t the same as trust.

As their friendship spirals into an all-consuming intimacy, Paul is desperate to protect their precarious bond, even as it becomes clear that pressures from the outside world are nothing compared with the brutality they are capable of inflicting on one another. Separation is out of the question. But as their orbit compresses and their grip on one another tightens, they are drawn to an act of irrevocable violence that will force the young men to confront a shattering truth at the core of their relationship.

Exquisitely plotted, unfolding with a propulsive ferocity, These Violent Delights is a novel of escalating dread and an excavation of the unsettling depths of human desire.