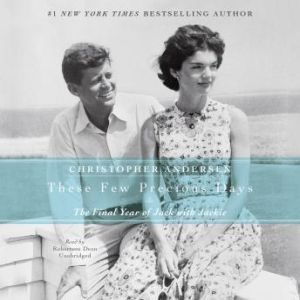 These Few Precious Days: The Final Year of Jack with Jackie

They were the original power coupleoutlandishly rich, impossibly attractive, and endlessly fascinating. Now, in this rare behind-the-scenes portrait of the Kennedys in their final year together, #1New York Timesbestselling biographer Christopher Andersen shows us a side of JFK and Jackie weve never seen before. Tender, intimate, complex, and, at times, explosive, theirs is a love story unlike any otherfilled with secrets, scandals, and bombshells that could never be fully revealed until now. Andersen reveals stunning new details about the Kennedys rumored affairshers as well as hisand how they ultimately overcame all odds to save their marriage; the presidents many premonitions of his own death and how he repeatedly tried to pull out of his last fateful trip to Dallas; shocking revelations about how the couple, unaware of the dangers, became dependent on amphetamine injections, the real reasonaccording to his longtime personal physicianfor JFKs notorious libido; how the tragic death of their infant son Patrick led to an emotional outpouring from the president that surprised even their closest friendsand brought JFK and Jackie closer than they had ever been; and touching firsthand accounts of the familys most private moments, before and after the assassination. Drawing on hundreds of interviews conducted with the Kennedys inner circlefrom family members and lifelong friends to key advisors and political confidantsAndersen takes us deeper inside the world of the president and his first lady than ever before. Unsparing yet sympathetic, bigger than life but all too real,These Few Precious Dayscaptures the ups and downs of a marriage, a man, and a woman, the memories of which will continue to fascinate and inspire for generations to come.