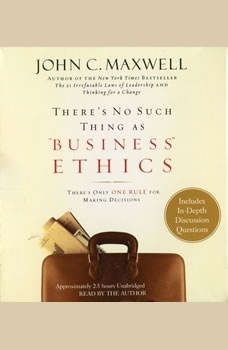 There's No Such Thing as "Business" Ethics: There's Only One Rule for Making Decisions

Best-selling author and expert on leadership John C. Maxwell claims there is only one rule for business.How does a person judge what is ethical? Sometimes it's clear. You know Enron's leaders were in the wrong. But is it always easy to see where the line is in your life? What's the standard? And can it work in all situations? John C. Maxwell thinks it can. When the New York Times best-selling author, successful businessman, and former pastor was asked about his thoughts on business ethics, his response was, "There's no such thing. There's only ethics."Maxwell asserts there's one ethical standard for all behavior. And you might be surprised by what it's based on. Did you know that a variation of the Golden Rule exists in every major religion? In There's No Such Thing as Business Ethics, Maxwell shows how people can live with integrity by using the Golden Rule as their standard (regardless of religion, culture, or circumstances). Along the way, he delves into the desires of the human heart, reveals the five most common causes that get people off track ethically, and teaches how to develop the Midas touch when it comes to integrity.