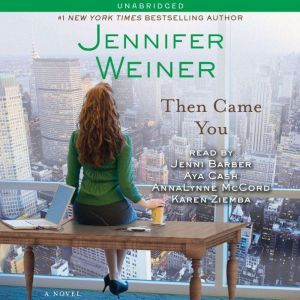 #1 New York Times bestselling author Jennifer Weiner takes readers into the heart of women’s lives in an unforgettable, timely tale.AN UNEXPECTED LOVE STORY . . . Jules Strauss is a Princeton senior on a full scholarship who plans on selling her “pedigree” eggs to help save her father from addiction. Annie Barrow, a struggling Pennsylvania housewife, thinks that carrying another woman’s child will help her recover a sense of purpose and will bring in some much-needed cash. India Bishop, thirty-eight (really, forty-three) and recently married to the wealthy Marcus Croft, yearns for a baby for reasons that have more to do with money than with love. When her attempts at pregnancy fail, she turns to Jules and Annie to make her dreams come true. But each of their plans is thrown into disarray when Bettina, Marcus’s privileged daughter, becomes suspicious that her new stepmother is not what she seems . . . Told with Jennifer Weiner’s trademark wit and sharp observations, Then Came You is a hilarious, tender, and timely tale that explores themes of class and entitlement, surrogacy and charity, the rights of a parent and the measure of a mother.