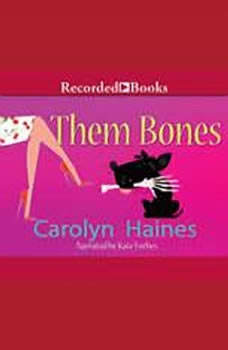 If only I hadn't kidnapped the dog...but the ransom paid the mortgage....Now I seem to be a private eye....I shouldn't have listened to that ghost....Meet Sarah Booth Delaney...an unconventional Southern belle whose knack for uncovering the truth is about to make her the hottest detective in Zinnia, Mississippi...if it doesn't make her the deadest. No self-respecting lady would allow herself to end up in Sarah Booth's situation. Unwed, unemployed, and over thirty, she's flat broke and about to lose the family plantation. Not to mention being haunted by the ghost of her great-great-grandmother's nanny, who never misses an opportunity to remind her of her sorry state--or to suggest a plan of action, like ransoming her friend's prize pooch to raise some cash. But soon Sarah Booth's walk on the criminal side leads her deeper into unladylike territory, and she's hired to solve a murder. Did gorgeous, landed Hamilton Garrett V really kill his mother twenty years ago? And if so, what is Sarah Booth doing falling for this possible murderer? When she asks one too many questions and a new corpse turns up, she is suddenly a suspect herself...and Sarah Booth finds that digging up the bones of the past could leave her rolling over in her grave.

Who killed the killer? In his brilliant and startling new novel, Jonathan Kellerman, perennial bestselling author and premier proprietor of the psychological thriller, gives a sharp and timely twist to homicide's central question.Someone has murdere...

Kiss the Girls
by James Patterson

Join Alex Cross on his most terrifying murder case yet in this #1 New York Times bestseller and one of PBS's "100 Great American Reads."In Los Angeles, a reporter investigating a series of murders is killed. In Chapel Hill, North Carolina, a beauti...

The Ritual Bath
by Faye Kellerman

Detective Peter Decker of the LAPD is stunned when he gets the report. Someone has shattered the sanctuary of a remote yeshiva community in the California hills with an unimaginable crime. One of the women was brutally raped as she returned from th...