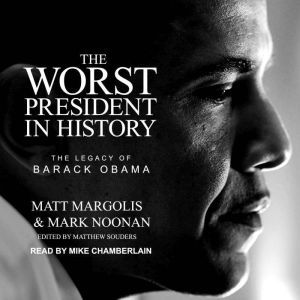 The Worst President in History: The Legacy of Barack Obama

As Barack Obama's presidential failures keep adding up, remembering them all can be a challenge. Matt Margolis and Mark Noonan have compiled everything you need to know about the presidency of Barack Obama (so far) into one book. Now you can easily find all the information that was ignored by the media and that Barack Obama would like you to forget. Did Barack Obama really save this country from another Great Depression? Did he really improve our country's image around the world, or unite America? What about the new era of post-partisanship and government transparency? Did he really expand health coverage while lowering costs and cutting taxes? The Worst President in History: The Legacy of Barack Obama compiles 200 inconvenient truths about Obama's presidency—the facts that will shape his legacy: His real record on the economy; the disaster that is Obamacare; his shocking abuses of taxpayer dollars; his bitterly divisive style of governing; his shameless usurping of the Constitution; his scandals and cover ups; his policy failures at home and abroad; the unprecedented expansion of government power . . . and more.

Complete liars - no one could be worst than Dtrumpf. He’s breaking every law possible - has spent much more money than any president ever - has always been a liar and a crook. Is ruining our Country. He is the biggest BASTARD on the planet

I will not order from you. This is trash. You have lost a customer. One star just to make this comment.

Goodreads you are cancelled too. Barnes and Noble next. Pure trash.

Did he really improve our country's image around the world, or unite America? America lost its "image" over 400 years ago. Not even God himself could improve this vile country called Amerikkka!

Why is he considered the worst president? I'll give you one guess...Just look at him, his wife and kids. Self explanatory in AmeriKKKa!