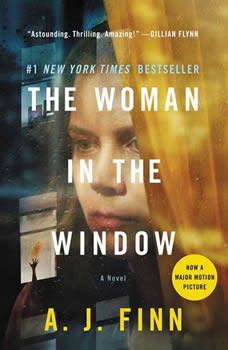 The Woman in the Window

Instant #1 New York Times Bestseller!“Astounding. Thrilling. Amazing.” —Gillian Flynn“Unputdownable.” —Stephen King“A dark, twisty confection.” —Ruth Ware“Absolutely gripping.” —Louise PennyFor readers of Gillian Flynn and Tana French comes one of the decade’s most anticipated debuts, to be published in thirty-six languages around the world and already in development as a major film from Fox: a twisty, powerful Hitchcockian thriller about an agoraphobic woman who believes she witnessed a crime in a neighboring house.It isn’t paranoia if it’s really happening . . . Anna Fox lives alone—a recluse in her New York City home, unable to venture outside. She spends her day drinking wine (maybe too much), watching old movies, recalling happier times . . . and spying on her neighbors.Then the Russells move into the house across the way: a father, mother, their teenaged son. The perfect family. But when Anna, gazing out her window one night, sees something she shouldn’t, her world begins to crumble?and its shocking secrets are laid bare.What is real? What is imagined? Who is in danger? Who is in control? In this diabolically gripping thriller, no one—and nothing—is what it seems.Twisty and powerful, ingenious and moving, The Woman in the Window is a smart, sophisticated novel of psychological suspense that recalls the best of Hitchcock.BONUS: Includes an interview with author A.J. Finn.

I an initial novel, A. J. Finn writes a psychoigical thriller, THE WOMAN IN THE WINDOW. Finn worked a decade within the publishing business in New York and London. Many do not have that opportunity to immerse themselves in the business before they begin their actual writing career. Finn has a particular interest in mysteries and thrillers.

After exiting the employment in publishing, Finn was free to pursue the writing career in earnest, with the first effort having been sold in 43 territories around the world. THE WOMAN IN THE WINDOW was inspired by Finn's love of Patricia Highsmith, Sherlock Holmes, Alfred Hitchcock, and others. Finn also admits to having personal issues with depression and mental health. Finn also has a passion for reading, cooking, and colleting in first edition books.

The film adaptation of the novel will be released worldwide in autumn of 2019, starring Amy Adams, Gary Oldman, and Julianne Moore.