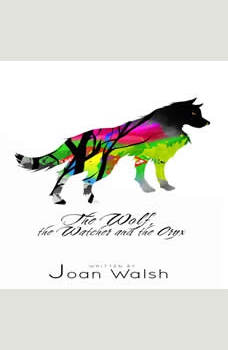 The Wolf, the Watcher, and the Oryx

Khoa and his grandfather, Tristian are thought to be the last two descendants of an ancient pack of white wolves who followed ‘the way of the wolf.’ As the novel opens, Tristian lies dying, having been torn apart by the pack, for teaching Khoa ‘the way,’ which is now forbidden. The old wolf sends Khoa on a quest to find a watcher wolf, a book, and a society of white wolves; none of which may exist. As Khoa escapes through a mole tunnel that his grandfather had prepared for him, the pack waits outside the hut to ‘set upon him’. In this Revisionist pack wolves kill wolves. Khoa is a reluctant hero, but through his adventures he takes on more belief in the traditions his grandfather had opened him up to. Khoa goes over a waterfall, runs into vipers, and has other troubles, but finally makes it to the river where Tristian told him he would find the Watcher Wolf. It is here that his new family finds him. His adopted zoo is made up of Washer, the raccoon, Pieces, the old chewed rabbit, and Serious, the young, officious rabbit, to name a few who add a lighter side to Khoas quest. Khoa has a love interest in the story in the form of Ani, an artic white wolf. They grew up in the Revisionist Society together, but never knew they had feelings for each other. Ani sees Khoa escape, and hopes to have Staver, Dueces' son, rescue her instead of hounding Khoa's trail to give him a head start. She places her paw in the mouth of the red iron dog, a man trap, and puts a twig in it to prevent her from really getting hurt, but the steel trap snaps the twig and she is caught in it for real. Scout, her father, and the pack are on the trail of Khoa, but get her scent and follow it until they realize Khoa isn't with her. Through a twist in the tale, Scout talks his daughter into leaving the pack and setting out to look for Khoa, which she does with the help of Retread, who happens to be one of the alpha pack leader, Dueces’ son. They have turn

The Delusion
by Laura Gallier

Merchant of Alyss
by Thomas Locke