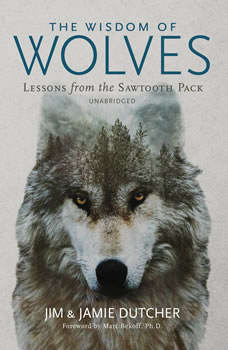 The Wisdom of Wolves: Lessons from the Sawtooth Pack

From the world-famous couple who lived alongside a three-generation wolf pack, this book of inspiration, drawn from the wild, will fascinate animal and nature lovers alike. For six years Jim and Jamie Dutcher lived intimately with a pack of wolves, gaining their trust as no one has before. In this book the Dutchers reflect on the virtues they observed in wolf society and behavior. Each chapter exemplifies a principle, such as kindness, teamwork, playfulness, respect, curiosity, and compassion. Their heartfelt stories combine into a thought-provoking meditation on the values shared between the human and the animal world. An Esquire pick of Best Nonfiction Books of 2018 (So Far).

Living with Wolves!
by Jim Dutcher

Imagine living with a pack of wolves! For National Geographic wildlife documentarians Jim and Jamie Dutcher, that dream came true. Join the Dutchers as they discover what life is like among wolves in the western wilderness. Filled with engaging phot...