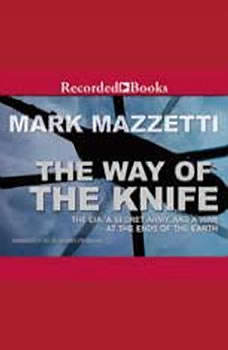 The Way of the Knife: The CIA, a Secret Army, and a War at the Ends of the Earth

Pulitzer Prize winner Mark Mazzetti examines these secret wars over the past decade, tracking key characters from the intelligence and military communities across the world. Among the characters we meet in The Way of the Knife are a young CIA officer dropped into the tribal areas to learn the hard way how the spy games in Pakistan are played, an Air Force test pilot who fired the first drone missile in the Nevada desert, a chain-smoking Pentagon official who ran an off-the-books spying operation in Afghanistan and Pakistan, a woman from the horse country of Virginia who became obsessed with Somalia and convinced the Pentagon to hire her to gather intelligence about al Qaeda operatives there. Gripping, newsbreaking, and powerfully told, The Way of the Knife reveals the true nature of American warfare in the twenty-first century—a model that is here to stay.