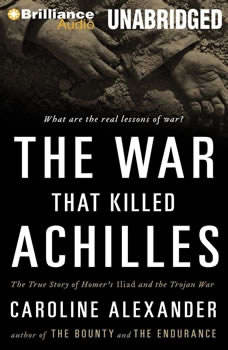 The War That Killed Achilles: The True Story of Homer's Iliad and the Trojan War

The dramatic events of the Trojan War are legend—but Homer’s epic poem, Iliad, is devoted entirely to a few mundane weeks at the end of a debilitating, waning ten-year campaign. The story’s focus is not on drama but on a bitter truth: both armies want nothing more than to stop fighting and go home. Achilles—the electrifying hero who is Homer’s brilliant creation—quarrels with his commander, Agamemnon, but eventually returns to the field to avenge a comrade’s death. Few warriors, in life or literature, have challenged their commanding officer and the rationale of the war they fought as fiercely as did Homer’s Achilles. Homer’s Iliad addresses the central questions defining the war experience of every age. Is a warrior ever justified in challenging his commander? Must he sacrifice his life for someone else’s cause? Giving his life for his country, does a man betray his family? Can death ever be compensated by glory? How is a catastrophic war ever allowed to start—and why, if all parties wish it over, can it not be ended? As she did in The Endurance and The Bounty, Caroline Alexander has taken apart a story we think we know and put it back together in a way that reveals what Homer really meant us to glean from his masterpiece. Written with the authority of a scholar and the vigor of a bestselling narrative historian, The War That Killed Achilles is a superb and utterly timely presentation of one of the timeless stories of our civilization.