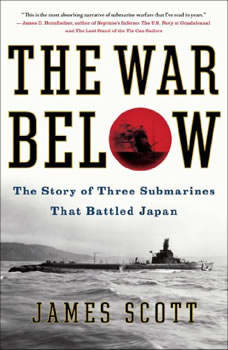 The War Below: The Story of Three Submarines That Battled Japan

The riveting story of the submarine force that helped win World War II by ravaging Japans merchant fleet and destroying its economyThe War Belowis a dramatic account of extraordinary heroism, ingenuity, and perseveranceand the vital role American submarines played in winning the Pacific War. Focusing on the unique stories of the submarinesSilversides,Drum, andTangand the men who skippered and crewed themJames Scott takes readers beneath the waves to experience the thrill of a direct hit on a merchant ship and the terror of depth charge attacks. Its a story filled with incredible feats of courage, including an emergency appendectomy performed with spoons by an inexperienced medic and the desperate struggle of sailors to escape from a flooded submarine stuck on the bottom, as well as tragic moments such as American submarines sinking an unmarked enemy ship carrying some 1,800 American POWs.The casualty rate among submariners topped that of all military branches, a staggering six times higher than the surface navy. The war claimed almost one out of every five boats. But Japan was so ravaged by the loss of precious fuel and supplies that by wars end, Japanese warships lay at anchor while hungry civilians ate sawdust. Scott paints an unforgettable picture of the dangerous life submariners endured, including the atrocious prison camps where the Japanese beat, tortured, and starved captured Allied troops. Based on more than one hundred interviews with submarine veterans and a review of more than three thousand pages of previously unpublished letters, diaries, and personal writings, The War Belowallows readers to experience the Pacific War as never before.