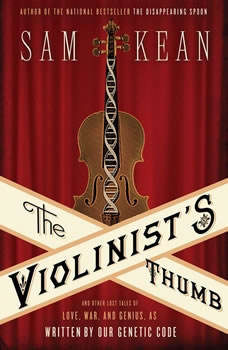 The Violinist's Thumb: And Other Lost Tales of Love, War, and Genius, as Written by Our Genetic Code

From New York Times bestselling author Sam Kean comes incredible stories of science, history, language, and music, as told by our own DNA. In The Disappearing Spoon, bestselling author Sam Kean unlocked the mysteries of the periodic table. In THE VIOLINIST'S THUMB, he explores the wonders of the magical building block of life: DNA.There are genes to explain crazy cat ladies, why other people have no fingerprints, and why some people survive nuclear bombs. Genes illuminate everything from JFK's bronze skin (it wasn't a tan) to Einstein's genius. They prove that Neanderthals and humans bred thousands of years more recently than any of us would feel comfortable thinking. They can even allow some people, because of the exceptional flexibility of their thumbs and fingers, to become truly singular violinists.Kean's vibrant storytelling once again makes science entertaining, explaining human history and whimsy while showing how DNA will influence our species' future.