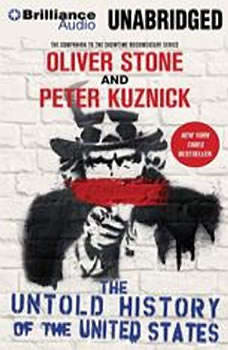 The Untold History of the United States

“At last the world knows America as the savior of the world!” — Woodrow Wilson The notion of American exceptionalism, dating back to John Winthrop’s 1630 sermon aboard the Arabella, still warps Americans’ understanding of their nation’s role in the world. Most are loathe to admit that the United States has any imperial pretensions. But history tells a different story as filmmaker Oliver Stone and historian Peter Kuznick reveal in this riveting account of the rise and decline of the American empire. They trace the American empire through the bloody U.S. suppression of the Filipino struggle for independence; the establishment of U.S. financial hegemony via World War I; the repeated U.S. interventions, covert operations, and wars in Latin America, Asia, and the Middle East; the transformation of America into a prying national security state; the accumulation of vast fortunes by the wealthiest Americans; and troubling assaults on U.S. constitutional liberties. Aided by the latest archival findings and recently declassified documents and building on the research of the world’s best scholars, Stone and Kuznick construct an often shocking but meticulously documented “people’s history” of the American empire that offers startling context to the Bush-Cheney policies that put us at war in two Muslim countries and show us why the Obama administration has had such a difficult time cleaving a new path. Stone and Kuznick will introduce listeners to a pantheon of heroes and villains as they show not only how far the United States has drifted from its democratic traditions but the powerful forces that have struggled to get us back on track. The authors reveal that: •The atomic bombings of Hiroshima and Nagasaki were militarily unnecessary and morally indefensible. •The United States, not the Soviet Union, bore the lion’s share of responsibility for perpetuating the Cold War. •The U.S. love affair with right-wing dictators has gone as far as overthrowing elected leaders, arming and training murderous military officers, and forcing millions of people into poverty. •U.S.-funded Islamist fundamentalists, who fought against the Soviets in Afghanistan, have blown back to threaten the interests of the United States and its allies. •U.S. presidents, especially in wartime, have frequently trampled on the Constitution and international law. •The United States has brandished nuclear threats repeatedly and come terrifyingly close to nuclear war. American leaders often believe they are unbound by history, yet Stone and Kuznick argue that we must face our troubling history honestly and forthrightly in order to set a new course for the twenty-first century. Their conclusions will astonish even experts, but there is one question only listeners can answer: Is it too late for America to change?