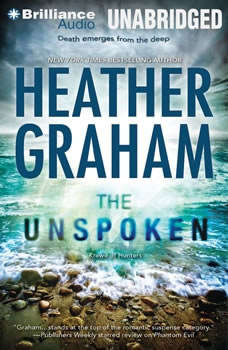 1898: Bound for Chicago, the freighter Jerry McGuen goes down in Lake Michigan, taking with it every man aboard. But what other fate could befall a vessel carrying the ill-gotten sarcophagus of an Egyptian sorcerer? Now: A veteran diver and “ghost ship” expert is exploring the legendary wreck for a documentary. He dies inexplicably inside the freighter’s main saloon. Then another diver is killed and panicked rumors rise like bubbles from the lake: ancient demons have awakened below! The expedition’s beleaguered financier calls paranormal investigator Katya Sokolov to Chicago to save the film — and perhaps some innocent lives. Along with media forensics guru Will Chan, Kat plumbs the depths of an evil that may date back to the time of the Pharaohs. But some secrets are best drowned in the seas of the past...

The Unspoken
Krewe of Hunters #0