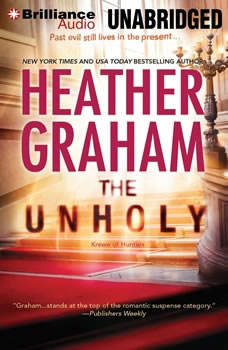 The 1940s: hard-boiled detectives and femmes fatale are box-office gold. In one iconic scene, set in a deserted museum, the private eye arrives too late, and the buxom beauty is throttled by an ominous Egyptian priest. Now: the Black Box Cinema immortalizes Hollywood’s Golden Age in its gallery of film noir tributes. But the mannequin of that Egyptian priest is hardly lifeless. He walks – and a young starlet dies a terrifying death. Movie mogul Eddie Archer’s son is charged with the grisly murder. Eddie calls agent Sean Cameron, who specializes in…irregular investigations. As part of an FBI paranormal forensics team, Cameron knows that nightmares aren’t limited to the silver screen. Working with special-effects artist Madison Darvil – who has her own otherworldly gifts – Cameron delves into the malevolent force animating more than one movie monster….

The Unholy
Krewe of Hunters #0

The Unspoken
Krewe of Hunters