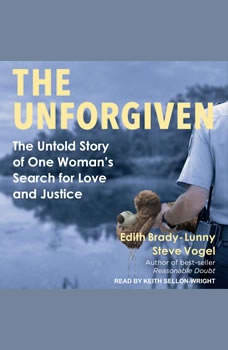 The Unforgiven: The Untold Story of One Woman's Search for Love and Justice

It's a case reminiscent of the explosive story of Susan Smith, convicted in the drownings of her two young sons in South Carolina. But in The Unforgiven, three young children are in the back seat of a car driven by Amanda Hamm's boyfriend as it slips into an Illinois lake. Amanda and her boyfriend survive. Her three children do not. The question of whether it was a horrible accident or a murderous plot divided family and friends and traumatized the entire community. The brief but intense police investigation included seven interviews Hamm voluntarily gave police without the benefit of counsel. The outcome remains controversial to this day and comes full circle with state child welfare workers' concern about children born to Hamm since the fateful day at Clinton Lake. The Unforgiven coauthor and journalist Edith Brady-Lunny covered the case from start-to-finish, beginning the night of the drownings. Her coauthor Steve Vogel lives nearby. His Reasonable Doubt, considered a true crime classic, was a New York Times bestseller. Together they have extensive first-hand knowledge of the case and access to nearly every record related to the court proceedings.

The Brain Defense
by Kevin Davis

Called “the best kind of nonfiction” by Michael Connelly, this riveting new book combines true crime, brain science, and courtroom drama.In 1991, the police were called to East 72nd St. in Manhattan, where a woman's body had fallen from ...

During the bleak winter of 1692 in the rigid Puritan community of Salem Village, Massachusetts, a group of young girls began experiencing violent fits, allegedly tormented by Satan and the witches who worshipped him. From the girls' initial denounci...

Anatomy of Injustice
by Raymond Bonner

From Pulitzer Prize winner Raymond Bonner comes the gripping story of a grievously mishandled murder case that put a twentythreeyearold man on death row. In January 1982, an elderly white widow was found brutally murdered in the small town of Green...

A man accused of a murder he didn't commit languishes on death row. A crusading lawyer is determined to free him. This powerful book reads like a compelling legal thriller with one crucial difference: Justice is not served in the end.In 1986, Kris M...

In 1982, Sister Helen Prejean became the spiritual advisor to Patrick Sonnier, the convicted killer of two teenagers who was sentenced to die in the electric chair of Louisiana’s Angola State Prison. In the months before Sonnier&rsqu...

Courtroom 302 is the fascinating story of one year in Chicago's Cook County Criminal Courthouse, the busiest felony courthouse in the country. Here we see the system through the eyes of the men and women who experience it, not only in the courtroom ...

Nominated for the 49th NAACP Image Award for Outstanding Literary Work (Nonfiction)A 2017 Washington Post Notable Book A Kirkus Best Book of 2017“Butler has hit his stride. This is a meditation, a sonnet, a legal brief, a poetry slam and a dis...

On its initial publication in 1998, John R. Lott's More Guns, Less Crime drew both lavish praise and heated criticism. More than a decade later, it continues to play a key role in ongoing arguments over gun-control laws: despite all the attacks by g...