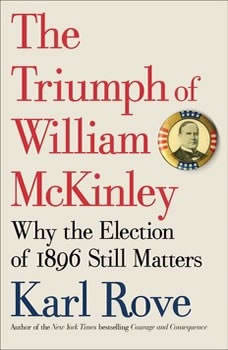 The Triumph of William McKinley: Why the Election of 1896 Still Matters

From New York Times bestselling author and political mastermind Karl Rove comes a fresh look at President William McKinley who found a message that healed his nation, pried his party away from its bosses, and extended its reach to forge a governing majority that lasted thirty years.Many of the changes that the country experienced in 1896 match those of today: A rising immigrant population made traditional white Protestants a shrinking share of the electorate, an economic upheaval led to rising inequality, and there was little common ground between the two parties. McKinley’s campaign found answers to many of these challenges, which is why it is so relevant to what ails our politics now. A talented politician and reserved Ohioan, McKinley (called “The Major”) changed the arc of American history by running the first truly modern presidential campaign. Knowing he didn’t stand a chance with the GOP’s traditional base of supporters, he did the unthinkable and reached out to diverse ethnic groups, including openly seeking the endorsement of Catholic Church leaders. Running on the slogan “The Man Against the Bosses,” McKinley also took on the moneymen who controlled the party by doling out favors. He even deployed what we would consider modern tactics, including micro-targeting voters with the use of the latest technology. Above all, he offered bold and controversial answers to the nation’s most pressing challenge: how to make a new, more global economy work for everyone. And although he alienated factions within his party and longtime allies, he won the White House. The 1896 election is a compelling drama in its own right, but McKinley’s brilliant strategies offer important and powerful lessons for both political parties today.