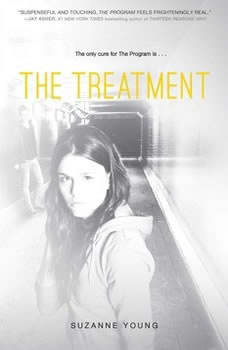 A Reading Group Guide to The Treatment By Suzanne Young   Discussion Questions 1. What can you do to get help if you, or someone close to you, exhibits signs of depression? Who are safe, reliable people in your life whom you can turn to? 2. Compare and contrast The Program to its sequel, The Treatment. How have the main characters changed? How have they remained consistent? Describe your experience reading The Treatment. Do you think it properly continued the story that began in The Program? 3. The Program considers teen depression “an infection.” Define infection. How (or when) does depression qualify as infection? Is that a valid term? Is it possible for depression to be a behavioral contagion, as the Program argues? Sloane posits, “The Program says those who are infected exhibit all sorts of uncharacteristic behaviors, including promiscuity, anger, and depression. Maybe it never occurred to the good doctors that sometimes a couple might just be hot for each other or angry or sad. It’s not always sickness.” Defend or refute Sloane’s theory. 4. Dr. Pritchard explains that a 100 percent cure rate is vitally important to The Program—“the committee made it clear that perfection was the ultimate goal.” Why were the powers behind The Program so concerned with this unanimous “success” rate? 5. Sloane narrates her experience in the Suicide Club, “The people float by, their chatter muted by music—the beats are transfixing, heavy, and soul-scratching. I’m swayed by it, by something I forgot was there—something dark.” Describe the atmosphere of the Suicide Club, and why Sloane and other rebels were attracted to it. 6. Dallas introduces the Suicide Club as a place where the rebels can be themselves. Sloane considers it an opportunity to “be someone else for tonight.” When do you think Sloane was most “herself” in The Treatment? How about Dallas? James? Realm? When in life is it critical to be yourself and when is it okay to be someone else? 7. Throughout the book, Sloane continues to confirm her love for James, in spite of the stressful situations that threaten their relationship, plus a lack of reaffirming memories, on both sides. How does she know that she loves James? On what criteria is her love based? 8. When Realm first reappears and explains himself, Sloane is overwrought with mixed and inexplicable feelings. Then she concludes, “I still trust him. I trust him even though I know he’s lying to me.” What does she mean? How can lying be trustworthy? Have you experienced this discrepancy in your own experiences? 9. At one point, Realm suggests to Sloane, “Everybody lies.” In response, Sloane contemplates, “As odd as the statement is, I think it’s a reflection of our lives. We’re all guilty of hiding things—it’s the nature of the world today. We hide our feelings, we hide our past, we hide our true intentions. There’s no way to know what’s real anymore.” Is this an appropriate estimation of our world today? When and why do people lie? Is lying ever necessary? 10. What is Realm’s purpose in The Treatment? What role does he play in the story itself? How does his character influence the others around him? What is his significance to Sloane? 11. Sloane and Dallas do not get along at first. What is the reason for this negative dynamic? When does Sloane and Dallas’s relationship change, and why? 12. Among their group of Rebels, Cas makes an unexpected decision. How would you explain his motivations and do you agree with them? 13. Upon first reentering The Program, Sloane, feeling angry and betrayed, remarks, “My heart breaks and I shake my head, trying to rid myself of Cas’s memory. Pretending the past few weeks with him never happened.” Are there times we actually want to eliminate memories, like The Program is setting out to do? How would Sloane defend her feelings to The Program, in this situation? 14. What was your first impression of Dr. Pritchard? Did you trust him? Were you suspicious of his intentions? What evidence, in his behavior—or in the reactions of the rebels—contributed to your evaluation of Dr. Pritchard’s sincerity? 15. Dr. Pritchard argues, “The Program can never truly work. It’s in your personality to fight for what you believe in, what you love. The Program will fail because, although it can erase memories, the basic personalities remain unchanged.” How much of one’s personality is tied to memories? What does make up personality? Can one’s personality change, or is it fixed? 16. The Program is in the business, so they say, of providing “fresh starts” to troubled teens. What is the danger of erasing people’s bad memories—their failures and mistakes? 17. Nurse Kell claims, “I’m saving lives,” and “I buried two grandchildren in the past year, Sloane. So don’t assume that I don’t know about the epidemic. I know it far better than you do. I’m just a person willing to do what I can to stop it.” How do you feel about Nurse Kell? Can you empathize with her? How pure are her intentions? 18. One of the scariest aspects of The Program is that it operates without much accountability or supervision—its practices were hidden from the government, even. Who, ultimately, is responsible for keeping our health system (or any public system, for that matter) fair? 19. Kellan Thomas turns out to be a key player in the takedown of The Program. Why is he so invested in this case? Why do you think he risked so much to collaborate with the rebels? 20. Does Sloane love Realm? Did she ever love Realm? Can she love Realm and James at the same time? Who do you think is a better fit for her? 21. What happens to Sloane, James, Realm, and Dallas after The Treatment concludes? Imagine the direction each of their lives take: Do they ever intersect again?     Guide written by Catharine Prodromou, a Lead Teacher at the Alta Vista School in San Francisco, CA. This guide has been provided by Simon & Schuster for classroom, library, and reading group use. It may be reproduced in its entirety or excerpted for these purposes.