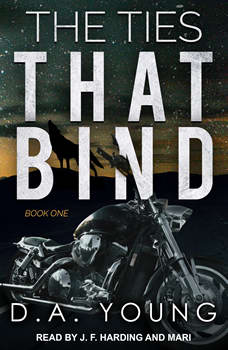 The Ties That Bind Book One

It's 1994 and the unexpected events of summer promise to be as hot as the heat itself in Chatham, New Mexico, for identical twin brothers Ransom and Harley Lawson. One is being groomed to lead by birthright in the Immortals MC while the other will challenge that generations-old rule for the greater good and survival of the club and their brotherhood. Inseparable since birth, the brothers have never let anything or anyone come between them until a returning ex-con club member and the arrival of a beautiful stranger cause their worlds to shift and their priorities right along with them. Fed up with her grandfather's autocratic behavior, eighteen-year-old Willamina 'Billy' Stanton rebels and flees from Santa Barbara. She heads to Chatham in the hopes of finally meeting her estranged father when she stumbles into Immortals territory, and into the arms of a lethal, green-eyed biker. For Ransom, she is everything his twenty-two-year-old heart will ever desire, even more than the title of 'Prez'. However, his loyalty to Harley and the club come first-a fact that he's continuously reminded of as his twin embarks on a dangerous path . . . Contains mature themes.