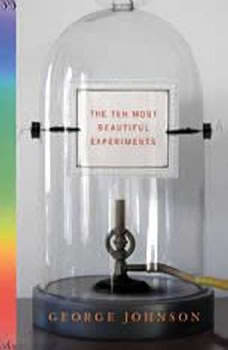 The Ten Most Beautiful Experiments

From the acclaimed New York Times science writer George Johnson, an irresistible book on the ten most fascinating experiments in the history of science—moments when a curious soul posed a particularly eloquent question to nature and received a crisp, unambiguous reply.

Johnson takes us to those times when the world seemed filled with mysterious forces, when scientists were dazzled by light, by electricity, and by the beating of the hearts they laid bare on the dissecting table.

We see Galileo singing to mark time as he measures the pull of gravity, and Newton carefully inserting a needle behind his eye to learn how light causes vibrations in the retina. William Harvey ties a tourniquet around his arm and watches his arteries throb above and his veins bulge below, proving that blood circulates. Luigi Galvani sparks electrical currents in dissected frog legs, wondering at the twitching muscle fibers, and Ivan Pavlov makes his now-famous dogs salivate at ascending chord progressions.

For all of them, diligence was rewarded. In an instant, confusion was swept aside and something new about nature leaped into view. In bringing us these stories, Johnson restores some of the romance to science, reminding us of the existential excitement of a single soul staring down the unknown.