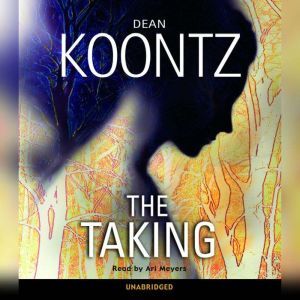 In one of the most dazzling books of his celebrated career, Dean Koontz delivers a masterwork of page-turning suspense that surpasses even his own inimitable reputation as a chronicler of our worst fears—and best dreams. In The Taking he tells the story of a community cut off from a world under siege, and the terrifying battle for survival waged by a young couple and their neighbors as familiar streets become fog-shrouded death traps. Gripping, heartbreaking, and triumphant in the face of mankind’s darkest hour, here is a small-town slice-of-doomsday thriller that strikes to the core of each of us to ask: What would you do in the midst of The Taking.

On the morning that will mark the end of the world they have known, Molly and Niel Sloan awaken to the drumbeat of rain on their roof. It has haunted their sleep, invaded their dreams, and now they rise to find a luminous silvery downpour drenching their small California mountain town. A strange scent hangs faintly in the air, and the young couple cannot shake the sense of something wrong.

As hours pass and the rain continues to fall, Molly and Niel listen to disturbing news of extreme weather phenomena across the globe. Before evening, their little town loses television and radio reception. Then telephone and the Internet are gone. With the ceaseless rain now comes an obscuring fog that transforms the once-friendly village into a ghostly labyrinth. By nightfall the Sloans have gathered with some of their neighbors to deal with community damage...but also because they feel the need to band together against some unknown threat, some enemy they cannot identify or even imagine.

In the night, strange noises arise, and at a distance, in the rain and the mist, mysterious lights are seen drifting among the trees. The rain diminishes with the dawn, but a moody gray-purple twilight prevails. Soon Molly, Niel, and their small band of friends will be forced to draw on reserves of strength, courage, and humanity they never knew they had. For within the misty gloom they will encounter something that reveals in a terrifying instant what is happening to their world—something that is hunting them with ruthless efficiency. Epic in scope, searingly intimate and immediate in perspective, The Taking is an adventure story like no other, a relentless roller-coaster read that brings apocalypse to Main Street and showcases the talents of one of our most original and mesmerizing novelists at the pinnacle of his powers.

I truly disliked this book, and can't seem to shake the disturbing, 'ick-y' (for lack of a better word)feeling it left me with. I'm a Koontz fan, but this one really was hard for me to get through. It was as if the author tried to think of the most gruesome, disgusting images he could imagine, and then crammed them into this book without any real developed plot or likable characters. It just seemed to be a way to showcase his ability to gross us out. The end was too abrupt and convenient--no real explanation and so many unanswered questions. I like the horror genre, but this was pointless.

I don't know why I gave this two stars instead of one - probably because Koontz is still articulate, even when producing this kind of dreck. The reader, Ari Meyers, would be better suited to recording Hallmark cards than reading this relentlessly grim story. Although grim, the story is oddly unmoving - you don't care about the central characters at all, unless knowing that one of them loves T.S. Eliot and the other is a carpenter is enough to make you care about them. From a man who can write the wonderful Odd Thomas stories, The Taking is a great disappointment.

This book was scary. A real page turner. Different from what I am used to reading by Koontz.

Warning: SPOILERS FOLLOW! It should not matter anyway, because you should not read this book. I've never been so utterly disgusted in my life. I listened to this whole book, whose characters were never developed in the least, only to find in the end that the antagonist was none other than: Satan. That's right, the Satan of the Bible. Are you kidding me? If I hadn't had to send this awful **** back to Booksfree, I would have set it on fire. Was this written to appeal to the Tea Party people? What is going on?