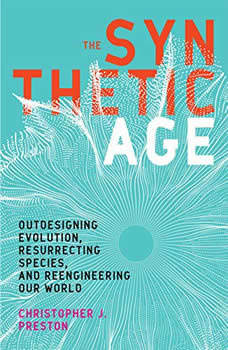 Imagining a future in which humans fundamentally reshape the natural world using nanotechnology, synthetic biology, de-extinction, and climate engineering.We have all heard that there are no longer any places left on Earth untouched by humans. The significance of this goes beyond statistics documenting melting glaciers and shrinking species counts. It signals a new geological epoch. In The Synthetic Age, Christopher Preston argues that what is most startling about this coming epoch is not only how much impact humans have had but, more important, how much deliberate shaping they will start to do. Emerging technologies promise to give us the power to take over some of Nature's most basic operations. It is not just that we are exiting the Holocene and entering the Anthropocene; it is that we are leaving behind the time in which planetary change is just the unintended consequence of unbridled industrialism. A world designed by engineers and technicians means the birth of the planet's first Synthetic Age.Preston describes a range of technologies that will reconfigure Earth's very metabolism: nanotechnologies that can restructure natural forms of matter; “molecular manufacturing” that offers unlimited repurposing; synthetic biology's potential to build, not just read, a genome; “biological mini-machines” that can outdesign evolution; the relocation and resurrection of species; and climate engineering attempts to manage solar radiation by synthesizing a volcanic haze, cool surface temperatures by increasing the brightness of clouds, and remove carbon from the atmosphere with artificial trees that capture carbon from the breeze. What does it mean when humans shift from being caretakers of the Earth to being shapers of it? And in whom should we trust to decide the contours of our synthetic future? These questions are too important to be left to the engineers.