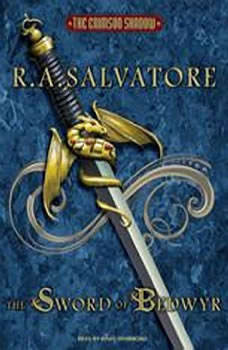 The Sword of Bedwyr

Young noble Luthien Bedwyr is too privileged to understand that his once-proud land, Eriador, suffers under the demonic oppression of Wizard-King Greensparrow. Until the day Luthien seeks justice for a friend's murder—only to become a fugitive fleeing the king's monstrous cyclopian soldiers. Befriended by the irrepressible "highwayhalfling" Oliver deBurrows, and enlisted by an ancient, mysterious mage, Luthien's exile will become an enchanted quest to steal a mystic prize from a dragon's hoard. Suddenly, Eriador's enslaved humans, elves, and dwarfs begin to rally around rumored tales of a freedom fighter who strikes Greensparrow's foul minions...an unknown hero who wields a legendary sword and magic cape...a warrior who is invisible but who casts the "Crimson Shadow."

The Sword of Bedwyr
Crimson Shadow #1