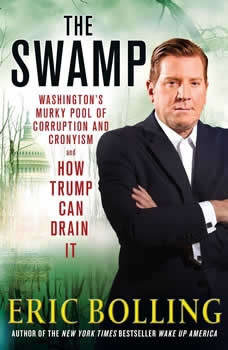 The Swamp: Washington's Murky Pool of Corruption and Cronyism and How Trump Can Drain It

This program is read by the author. When Washington D.C. was first built, it was on top of a swamp that had to be drained. Donald Trump says it's time to drain it again. In The Swamp, bestselling author and Fox News Channel host Eric Bolling presents an infuriating, amusing, revealing, and outrageous history of American politics, past and present, Republican and Democrat. From national political scandals to tempests in a teapot that blew up; bribery, blackmail, bullying, and backroom deals that contradicted public policies; cronyism that cost taxpayers hundreds upon hundreds of millions of dollars; and personal conduct that can only be described as regrettable, The Swamp is a journey downriver through the bayous and marshes of Capitol Hill and Foggy Bottom. The presidential election of 2016 was ugly, but it exposed a political, media, industry, and elite establishment that desperately wanted to elect a politician who received millions of dollars from terror-funding states over a businessman willing to tell the corrupt or incompetent, “You’re fired.” The audiobook concludes with a series of recommendations for President Trump: practical, hard-headed, and concise ways to drain the swamp and force Washington to be more transparent, more accountable, and more effective in how it serves those who have elected its politicians and pay the bills for their decisions.Last year President Trump declared Wake Up America to be a "huge" book; Eric Bolling's second audiobook is surely to build on that success. Entertaining and timely, The Swamp is the perfect audiobook for today's political climate.

The Franklin Scandal: A Story of Powerbrokers, Child Abuse & Betrayal
by Nick Bryant

A chilling exposé of corporate corruption and government cover-ups, this account of a nationwide child-trafficking and pedophilia ring in the United States tells a sordid tale of corruption in high places. The scandal originally surfaced duri...

"Elizabeth Holtzman has always been the first and the bravest, the smartest and most trusted. She is the expert we need to deal with an accidental President who got there as a serial sexual harasser, a candidate who lost the popular vote, and an uns...

“The DEEP STATE conspired to take down TRUMP. This book fills in all the details, and names names. All Patriots need to read it.” ―Alex Jones, founder, InfowarsThe Plot to Destroy Trump exposes the deep state conspiracy to discredi...

Despite Clintons commanding lead in the polls, hyper-partisan intelligence officials decided they needed an insurance policy against a Trump presidency. Thus was born the collusion narrative, built on an anonymously sourced dossier, secretly underwr...

In the spirit of Evicted, Bait and Switch, and The Big Short, a shocking, heart-wrenching investigation into America’s housing crisis and the modern-day robber barons who are making a fortune off the backs of the disenfranchised working and mi...

Backstabbing for Beginners
by Michael Soussan

Soon to be a major motion picture starring Ben Kingsley and Josh HutchersonThe year is 1997, Michael Soussan, a fresh-faced young graduate takes up a new job at the U.N.'s Oil-for-Food program, the largest humanitarian operation in the organization...

The former Assistant to the President and Director of Communications for the Office of Public Liaison in the Trump White House provides a jaw-dropping look into the corruption and controversy of the current administration.Few have been a member of D...