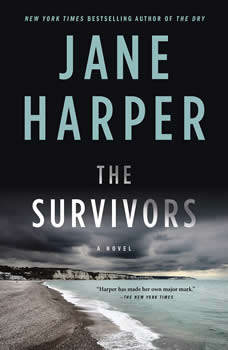 The Survivors: A Novel

The guilt that still haunts him resurfaces during a visit with his young family to the small coastal community he once called home.

Kieran's parents are struggling in a town where fortunes are forged by the sea. Between them all is his absent brother, Finn.

When a body is discovered on the beach, long-held secrets threaten to emerge. A sunken wreck, a missing girl, and questions that have never washed away...

Australian author, Jane Harper, is an international bestselling crime novelist. She received her education in the UK, where she was born, but returned to Australia in 2008 where she had gained citizenship. By 2011 she had a position with the Herald Sun in Melbourne. In 2014, she submitted her first short story that won a place in The Big Issue's annual Fiction Edition.

After her short story received acclaim, she was inspired to pursue a serious role in creative writing. Her first novel was The Dry, which won a literary award in 2015, and will be released as a feature film in the future. Her premier novel was followed by The Force of Nature, and The Lost Man.

Harper's crime novels have won her numerous top awards. She now resides in bayside Melbourne with her husband and daughter.