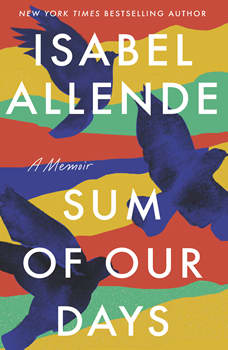 The Sum of Our Days

Narrated with warmth, humor, exceptional candor and wisdom, The Sum of Our Days is a portrait of a contemporary family, tied together by the love, strong will, and stubborn determination of a beloved matriarch, the indomitable New York Times bestselling author of The House of the Spirits, Isabel Allende.

Isabel Allende reconstructs the painful reality of her own life in the wake of the tragic death of her daughter, Paula. Narrated with warmth, humor, exceptional candor, and wisdom, this remarkable memoir is as exuberant and as full of life as its creator. Allende bares her soul while sharing her thoughts on love, marriage, motherhood, spirituality and religion, infidelity, addiction, and memory—and recounts stories of the wildly eccentric, strong-minded, and eclectic tribe she gathers around her and lovingly embraces as a new kind of family.