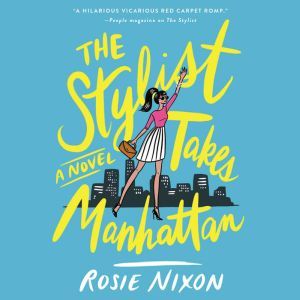 The Stylist Takes Manhattan: A Novel

Amber Green is back! The sequel to Rosie Nixon’s fun-filled debut follows Amber as she tries to see if she has what it takes to be a stylist in the fashion capital of the world: New York City.

She’ll take a bite out of the Big Apple’s fashion scene—if it doesn’t eat her alive first...

London stylist Amber Green has rebounded nicely since escaping the clutches of a Hollywood boss from hell. She’s got a dream job designing windows for Selfridge’s and her dream man in sweetly sexy boyfriend, Rob. In short, Amber loves her life and wouldn’t change a thing. But when Rob is hired to produce a reality series about the iconic Angel Wear lingerie fashion show, he breaks the news that he’s moving to New York…and invites Amber along on the adventure.

Ensconced in a Williamsburg sardine tin and in touch with a hotshot agent who advises she boost her social media presence, Amber hits Instagram hard, posting unintentional gossip fuel that culminates in pics of a mysterious new acquaintance who turns out to be a scandal unto himself. Between nightmarish gigs (baby photo shoots, anyone?) and styling a free-spirited starlet who seems allergic to clothing, Amber doesn’t know if she’s on the brink of a big break or a breakdown. That is, until a career-making opportunity falls into her lap—and with it, the truth about real friends vs. cheap knockoffs.