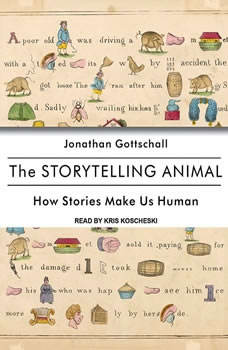 The Storytelling Animal: How Stories Make Us Human

Humans live in landscapes of make-believe. We spin fantasies. We devour novels, films, and plays. Even sporting events and criminal trials unfold as narratives. Yet the world of story has long remained an undiscovered and unmapped country. It's easy to say that humans are "wired" for story, but why?In this delightful and original book, Jonathan Gottschall offers the first unified theory of storytelling. He argues that stories help us navigate life's complex social problems—just as flight simulators prepare pilots for difficult situations. Storytelling has evolved, like other behaviors, to ensure our survival.Drawing on the latest research in neuroscience, psychology, and evolutionary biology, Gottschall tells us what it means to be a storytelling animal. Did you know that the more absorbed you are in a story, the more it changes your behavior? That all children act out the same kinds of stories, whether they grow up in a slum or a suburb? That people who read more fiction are more empathetic?Of course, our story instinct has a darker side. It makes us vulnerable to conspiracy theories, advertisements, and narratives about ourselves that are more "truthy" than true. National myths can also be terribly dangerous: Hitler's ambitions were partly fueled by a story. But as Gottschall shows in this remarkable book, stories can also change the world for the better. Most successful stories are moral—they teach us how to live, whether explicitly or implicitly, and bind us together around common values. We know we are master shapers of story. The Storytelling Animal finally reveals how stories shape us.

I Think You're Totally Wrong
by David Shields

A debate, nearly to the death, about life and art, cocktails included. And a soon-to-be major motion picture from James Franco! Caleb Powell always wanted to become an artist, but he overcommitted to life (he' s a stay-at-home dad to three young ...

A riveting account of the two years literary scholar Mikita Brottman spent reading literature with criminals in a maximum-security men’s prison outside Baltimore, and what she learned from them—Orange Is the New Black meets Reading Loli...

From the author of the New York Times bestselling How to Read Literature Like a Professor comes a highly entertaining and informative new book on the twenty-five works of literature that have most shaped the American character. Foster applies his m...

The Untold Story of the Talking Book
by Matthew Rubery

Histories of the book often move straight from the codex to the digital screen. Left out of that familiar account is nearly 150 years of audio recordings. Recounting the fascinating history of audio-recorded literature, Matthew Rubery traces the pat...

Anyone who has ever loved a book will relish this playful, yet deeply literate collection of essays celebrating the joy of reading. From building castles with books as a child, to the trauma of joining her library with her husband's, the author reve...

So We Read On
by Maureen Corrigan

The "Fresh Air" book critic investigates the enduring power of The Great Gatsby -- "The Great American Novel we all think we've read, but really haven't."Conceived nearly a century ago by a man who died believing himself a failure, it's now a rever...

Lit Up
by David Denby

A bestselling author and distinguished critic goes back to high school to find out whether books can shape livesIt's no secret that millions of American teenagers, caught up in social media, television, movies, and games, don't read seriously-they a...

A book reviewer for The Washington Post and NPR’s Fresh Air, Maureen Corrigan is obsessed with books—so much so that they caused her to delay marriage. This audiobook explores her obsession with all things literary. Corrigan expertly w...

After his daughter was born prematurely in 2010, Matt Burriesci set out to write a book about thirty-two great books, from Plato to Karl Marx, and how their lessons have applied to his life. As someone who has spent a long and successful career advo...