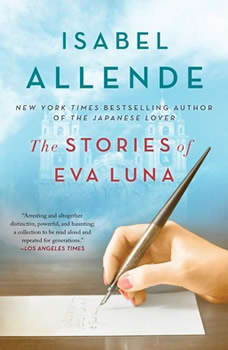 The Stories of Eva Luna

An intoxicating collection of short fiction by one of the most beloved writers of our time.Eva Luna is a young woman whose powers as a storyteller bring her friendship and love. Lying in bed with her European lover, refugee and journalist Rolf Carlé, Eva answers his request for a story “you have never told anyone before” with these twenty-three samples of her vibrant artistry. Interweaving the real and the magical, she explores love, vengeance, compassion, and the strengths of women, creating a world that is at once poignantly familiar and intriguingly new. Rendered in her sumptuously imagined, uniquely magical style, The Stories of Eva Luna is the cornerstone of Allende’s work. This treasure trove of brilliantly crafted stories is a superb example of a writer working at the height of her powers.