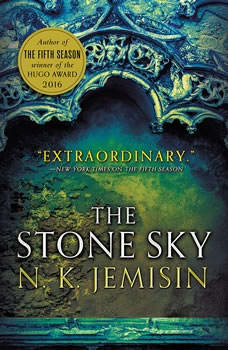 The shattering conclusion to the post-apocalyptic and highly acclaimed New York Times bestselling trilogy that began with The Fifth Season, winner of the Hugo Award for Best Novel in 2016, and The Obelisk Gate, winner of the Hugo Award for Best Novel in 2017.Winner of the Nebula Award for Best Novel 2018Winner of the Hugo Award for Best Novel 2018The Moon will soon return. Whether this heralds the destruction of humankind or something worse will depend on two women.Essun has inherited the power of Alabaster Tenring. With it, she hopes to find her daughter Nassun and forge a world in which every orogene child can grow up safe. For Nassun, her mother's mastery of the Obelisk Gate comes too late. She has seen the evil of the world, and accepted what her mother will not admit: that sometimes what is corrupt cannot be cleansed, only destroyed.THIS IS THE WAY THE WORLD ENDS... FOR THE LAST TIME."Extraordinary." - New York Times on The Fifth SeasonThe Broken EarthThe Fifth SeasonThe Obelisk GateThe Stone SkyFor more from N. K. Jemisin, check out:The Inheritance TrilogyThe Hundred Thousand KingdomsThe Broken KingdomsThe Kingdom of GodsThe Inheritance Trilogy (omnibus edition)Shades in Shadow: An Inheritance Triptych (e-only short fiction)The Awakened Kingdom (e-only novella)Dreamblood DuologyThe Killing MoonThe Shadowed SunThe Dreamblood Duology (omnibus)

The Stone Sky
The Broken Earth #3