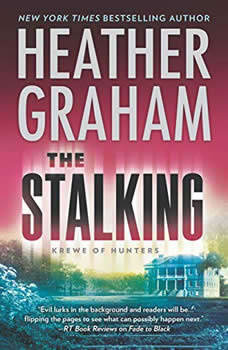 With the execution of a serial killer known as the Artiste, Cheyenne Donegal thinks a grim part of her past is finally put to rest. Her cousin had been the twisted killer’s final victim, and then-teenage Cheyenne was integral in bringing him to justice. That tragedy drove her to become an FBI agent. And now she’s back in Louisiana because someone is murdering young women in the same manner as the Artiste.

Krewe of Hunters agent Andre Broussard has deep ties in New Orleans and Cajun country beyond. He knows that more than one monster has stalked the bayou. Has a deadly threat been resurrected, or does someone have a dark inspiration?

With the life of a missing woman on the line, Cheyenne and Andre have to set aside their doubts about each other and work to discover the truth. The case is too close and too personal—but they can’t let it go, especially now that a ruthless killer has turned the tables and is hunting them.

The Stalking
Krewe of Hunters #29