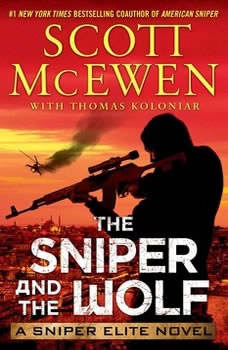 The Sniper and the Wolf: A Sniper Elite Novel

From the coauthor of the #1 New York Times bestseller American Sniper comes a heart-pounding military thriller in which American hero and SEAL Team sniper Gil Shannon joins up with an unlikely ally in order to stop a terrorist plot bent on destruction across Europe.Hot on the trail of “The Wolf,” a rogue Russian military sniper-turned-Chechen-terrorist, Gil Shannon turns from hunter to hunted when his mission is exposed by a traitor high up in US government. Shannon must turn to an unlikely ally—a deadly Russian special operative—to help even the odds. But when they discover that “The Wolf” is just the tip of a global terrorist plot whose goal is to upend the US economy and the stability of the Western world, Shannon and his team of operatives must track the terrorists down before their plan comes to fruition. Shannon comes head-to-head with legions of enemy fighters all across Europe in this breathtakingly cinematic and realistic military thriller, ending with a faceoff between Gil and the one sniper who may be his equal shot. Will he survive? This third action-packed and battle-filled adventure in the Sniper Elite series takes readers along for a white-knuckle ride across Europe in the company of American soldiers, Russian Special Operatives, and global leaders—and will keep you on the edge of your seat until the final scene.

The Sniper and the Wolf: A Sniper E...
Sniper Elite #3