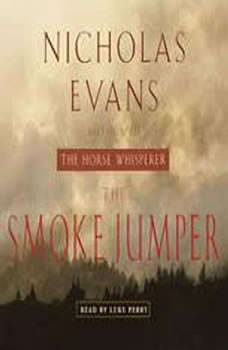 His first novel, the international phenomenon The Horse Whisperer, became a publishing legend, setting a benchmark for contemporary bestsellers when it hit #1 on the New York Times list faster than any first novel in history.

He returned to enthrall his fans all across the world with his second triumph, The Loop, proving that here was a master storyteller of enduring power and appeal.

Now the acclaimed author delivers a searing new novel of love and loyalty, of guilt and of honor. In a story set against the epic backdrop of wilderness firefighting and frontline photojournalism, he gives his millions of readers another hero...The Smoke Jumper.

In The Smoke Jumper, Nicholas Evans delivers his most powerful novel to date, a story of two best friends and the woman they both love. When a terrible mountain fire forces her to choose between them, all three lives are changed forever. Here, Evans explores the territory her has carved out as his own: raw but complex emotion set against a vast landscape. Writing unflinchingly about the yearnings of the human heart and the painful quest for self-discovery, he gives us here a story of three fine people forced to walk the flames of passion and guilt and to make the devastating choice between love and honor.

The Smoke Jumper combines pulse-pounding suspense with an unforgettable love story that his readers all over the world will avidly embrace.

Dear Listener,Twilight Whispers was a challenge for me. At the time I wrote it—1987—I wanted to push myself as a writer. The result: a book that was longer and more complex than anything I had written before then. In many respects, it is...