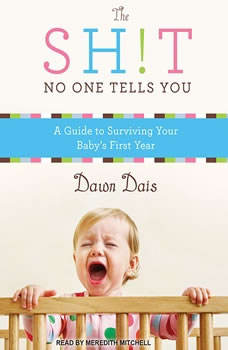 The Sh!t No One Tells You: A Guide to Surviving Your Baby's First Year

There comes a time in every new mother's life when she finds herself staring at her screaming, smelly "bundle of joy" and wishing someone had told her that her house would reek of vomit, or that she shouldn't buy the cute onesies with a thousand impossible buttons, or that she might cry more than the baby. Bestselling humor author Dawn Dais is convinced that there is a reason for this lack of preparedness. She believes that a vast conspiracy exists to hide the horrific truth about parenting from doe-eyed expectant mothers who might otherwise abandon their babies in hospitals and run for it. In The Sh!t No One Tells You, Dais reveals what it's really like to be a new parent and provides helpful insights, humor, and hope for those who feel overwhelmed by the exhausting trials they're suddenly facing. Dais offers real advice from real moms—along with hilarious anecdotes, clever tips, and the genuine encouragement every mom needs in order to survive the first year of parenthood.

Secrets of the Baby Whisperer
by Tracy Hogg

There is nothing so joyous as the birth of the child and, all too often, nothing so confusing, intimidating, and downright terrifying for the new parents. Why won't she stop crying? How can I get him to go to sleep?  If breastfeeding is nature'...

What's Going on in There?
by Ph.D. Eliot

As a research neuroscientist, Lise Eliot has made the study of the human brain her life's work. But it wasn't until she was pregnant with her first child that she became intrigued with the study of brain development. She wanted to know precisely how...