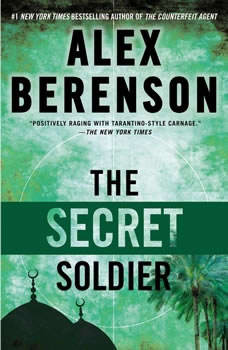 John Wells goes undercover in Saudi Arabia in a cutting-edge novel of modern suspense from the #1 New York Times-bestselling author.

John Wells may have left the CIA, but it hasn't left him. A mysterious call brings a surprise meeting with the aged monarch of Saudi Arabia, King Abdullah. "My kingdom is on a precipice," he tells Wells. "Powerful factions are plotting against me, and my own family is in danger. I don't know who I can trust, but I'm told I can trust you."

Reluctantly, and with the secret blessing of the CIA, Wells goes undercover; but the more he learns, the more complicated things become, and soon he, too, is unsure whom to trust, in Saudi Arabia or Washington. One thing, however, is clear: If the conspirators prevail, it will mean more than the fall of a monarch-it may be the beginning of the final conflagration between America and Islam.

The Ghost War
by Alex Berenson

Another thrilling adventure featuring John Wells, the deep cover CIA operative from the #1 New York Times bestselling author of The Faithful Spy and The DeceiversJohn Wells barely survived his homecoming when it was thought ...

The Talbot Odyssey
by Nelson DeMille

IT STARTED AS A SIMPLE SPY HUNT.IT BECAME A DESPERATE BATTLE TO SAVE THE WEST.For forty years Western intelligence agents have known a terrible secret: the Russians have a mole -- code-named Talbot -- inside the CIA. At first Talbot is suspected of...

#1 New York Times bestselling author Brad Thor brings us his darkest and most intriguing thriller yet—a terrifying story of espionage and betrayal—brilliantly paced with superb nonstop action.Born in the shadows and kept from heads of st...

On the streets of Washington, D.C., a brilliant scientist, the brains behind a revolutionary fighter aircraft prototype in development by the Pentagon, is snatched by masked thugs and disappears. Now five years later, an elderly professor at Cambri...

The Shadow Patrol
by Alex Berenson

In 2009, the CIA's Kabul Station fell for a source who promised to lead it to Bin Laden, but instead he blew himself up, taking the station's most senior officers with him. Now, more than two years later, the station is still floundering, agents ...