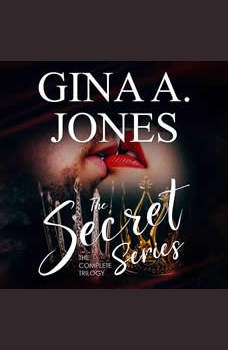 The Secret Series: The complete trilogy

This audible contains three complete books. His Secret #1 Her Secret #2 Secret Enemy #3 bundled together to complete The Secret Series.

Julia:   I don’t know what to expect alone at this isolated manor. I’m a nanny for a ten-year-old little girl. Her father is gone. I’m not sure he even exists. Things don’t seem right. There are strange calls, and I hang up. Then, one dark, stormy night, he enters my life. I watch his strange behavior. I witness the strange relationship between him and his daughter. I watch him, watch me.

She doesn’t know the truth.

Follow the epic journey of Julia Ellis and Jonas Fairbanks in this breathtaking, you’ll never see it coming, three-book trilogy of The Secret Series. Warning: This book contains graphic sexual scenes and is recommended for mature listeners only.